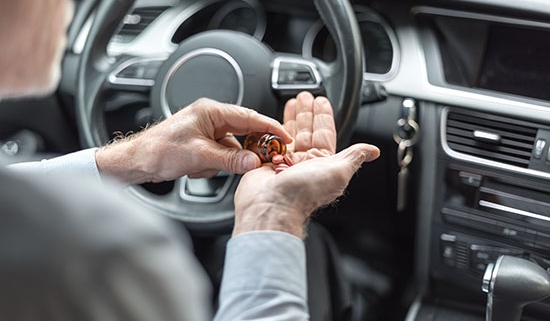 Did you know that you can get a DUI in Oregon even if you haven’t been drinking?

Many Oregon residents are surprised to learn that “Driving Under the Influence” isn’t limited to the influence of alcohol. You can also get into legal trouble for operating a vehicle if you have prescription drugs, weed, narcotics, and other illegal drugs or intoxicants in your system. Even something as seemingly innocent as cold medicine could put you at risk for a felony charge.

These substances are known to impair judgment, reaction time, depth perception, and coordination, making them dangerous when combined with driving. For example, someone on opioids for pain may be drowsy or dizzy. And, a driver who has recently used cocaine or methamphetamines might be more reckless or aggressive on the road.

Many think that marijuana is a harmless substance, but research shows that it can cause drivers to weave in and out of lanes, react slowly to stimuli, and they tend to pay less attention to the road.

In Oregon, the official charge is called a DUII, or driving under the influence of intoxicants.

A recent report from the National Survey on Drug Use and Health found that 12.8 million people drove while under the influence of illicit drugs in 2017. Drunk driving is still more prevalent than drugged driving, with 21.4 million admitting to committing this crime.

The national standard for drunk driving is a Blood-Alcohol Concentration (BAC) of 0.08 g/mL. There is no such standard for drugged driving primarily because drugs affect people differently, so a high concentration in one person may not have the same effect on someone else.

To determine if a driver is intoxicated, police officers are specially trained to detect impairment due to intoxicants.

Unlike other states, Oregon is not a “zero tolerance” state. This means that drivers can still legally operate a vehicle even if they have controlled substances in their system. Further, there’s no threshold of a legal versus an illegal amount of drug that makes driving a crime. Instead, the police determine if the drugs are adversely affecting the person’s ability to drive before issuing a DUII.

Currently, there is no scientifically sound method or systematic approach to proving drug impairment. The first step an officer is likely to take is to rule out alcohol when they observe a driver that is acting erratically. After committing a field breath-alcohol test and finding the drive to be alcohol-free, the police officer will then turn his or her attention to detecting drug use.

To detect the presence and concentration of illicit substances, the driver must then take a blood or urine test.

If you’re arrested for a DUII, your license will be suspended for 90 days, and you’ll have to pay some fees. A DUI attorney is a necessity to either help prove your innocence or reduce the consequences of both the administrative and criminal penalties that you could face if convicted. If you’re found guilty of a DUII, then the typical punishment for a first offense is a license suspension for a period of one year, a hefty fine (up to $10,000), and the subsequent use of an IID (ignition interlock device) after the suspension period is over.

Criminal penalties are also a possibility, including community service and/or a jail sentence lasting up to one year.

Everyone makes mistakes, and you deserve a lawyer you can trust to help argue your case. Contact the law office of Andy Green today for a free consultation.

DUI Hearings and Court Dates in Oregon: What to Expect